Ludwig Kirshner and The Bridge (Die Brücke),
From reality to the abstract: 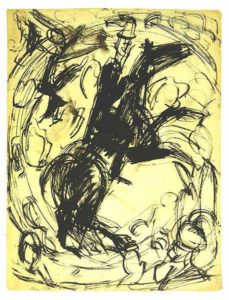 Name of work: The circus Rider

Author died more than 70 years ago – Sketch picture is public domain, however, the finished painting is at Saint Louis Art Museum.

Scribbles done by Kirchner and his group Die Brücke helped open new paths towards expressionist art, and to know their influences in our daily lives, including graphic design, and commercial art.

Die Brücke group was formed in 1905 almost simultaneously with Fauvism (movement of strong contrasts in the colors on paintings). His goal was to express the art for art. The importance of Kirchner and his group is that they become the extreme of post-impressionism, which already had experienced new ways to make drawings and paintings. They provoked curiosity and acceptance of art lovers by the artistic expressions from other cultures and regions, thus enriching opportunities for new changes in modernism.

The revered works of classical and practices copyists (artists who copied people and objects from reality) of art schools in Paris came to an end with the emergence of these new trends, plus the technological influence of photography. The latter, portraitists and landscapers, were forced to seek new routes of expression (to the abstract) because they could no longer compete against cameras.

Until a few years ago, France displayed the work of Kirchner and his group Die Brücke. Those were a closely guarded to prevent the extinguish of Paris as the light of culture. Kirchner committed suicide because of Nazism in Germany.

Powered by WordPress and WordPress Theme created with Artisteer.